Conceptualized by Ms. Nikita Poojari (also, one of the directors of Shiv Sagar Foods & Resorts), Butterfly High is an all-day multi-cuisine (pre-dominantly modern Indian, Mangalorean, Sea food and fusion) casual dining and lounge bar which is all set to offer food and drinks at affordable prices in an otherwise high-end locality like BKC – thereby ensuring that people from all walks of life enjoy a hearty meal with drinks, without worrying about a massive blow to their wallets. I did check their bar menu to verify the fact and their bar menu is indeed reasonably priced. The unconventional fusion food preparations enlisted in their food menu are reportedly the brain child of celebrity chef Rakesh Talwar. Butterfly High opened its doors to public on 22nd of June this year.

For the uninitiated, Ms. Nikita Poojari is the daughter of Mr. Narayan Poojari, the man behind Mumbai’s well known vegetarian restaurant brand Shiv Sagar that first opened up in Kemps Corner in 1990 and now has 16 branches spread all across the city. Nikita Poojari reportedly also owns Fish And Bait, a non-vegetarian restaurant in BKC. Narayan Poojari also owns Aura Banquet and co-owns Mahesh Lunch Home founded by Mr. Suru Karkera.

They have a special Executive meal lunch menu (limited) offering 6 varieties of set meals at prices ranging from INR 400 to INR 560 plus taxes per head on weekdays from 12 noon to  3.30 PM.

The eccentric yet stylish multi-coloured interiors exude youthful and party vibes. The dining area is divided into three sections – the lounge with comfortable low couches and wooden tables lined up along the sides, the main dining area with wooden chair and tables and the high dining tables in the centre of the dining hall with high seaters. They also house a separate 16-seater community style dining area for private dinners, parties and conferences. The other end of the dining hall houses a long and sturdy bar counter. The upbeat music and dim lighting further add to the charm and party vibes.

The creamy, supple and pale yellow Monterey Jack cheese rendered the Pulled Jackfruit Nachos an inviting aroma and a mesmerizing buttery and mild flavour. The pulled jackfruit thoroughly tossed in tangy-sweet BBQ sauce revealed a texture quite similar to that of pulled pork and turned out to be a surprisingly flavourful addition to the combination. The refried beans, tomato salsa and a hearty dollop of sour cream further ensured us an irresistible treat.

The crispy fried Bombay duck filled in between adequately pillow-y soft steamed bread in the Bombay Duck Rechaedo Bao revealed a relatively not-so-fiery flavour for a Rechaedo masala (which is otherwise supposed to be too fiery hot and spicy to taste) but did have a vivid tanginess of the todi vinegar packed in (like it’s supposed to have). The pickled onions further let out a juicy crunch in every bite with mellow pungent undertones and the coconut-mango chutney rendered the combination a much needed moistness. 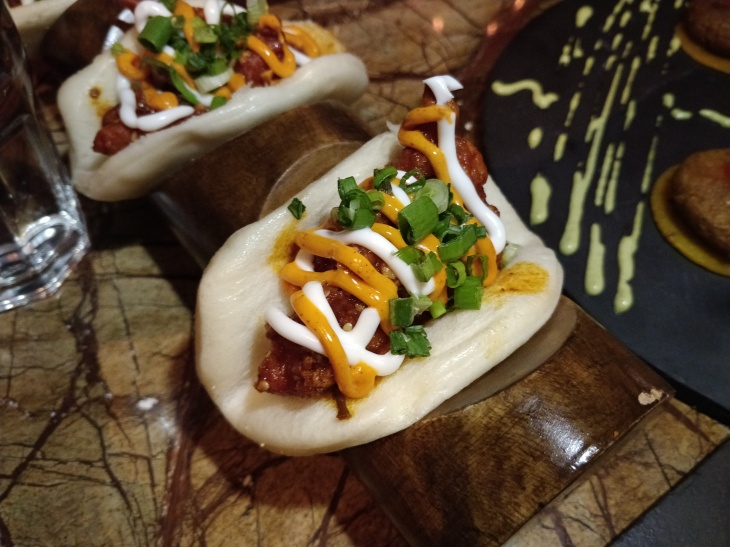 Crispy Sesame Chicken Bao comprised of juicy chunks of chicken thoroughly coated in a sweet and tangy sauce glaze and was finished off with some sesame seeds further adding a slight crunch to every bite. The bao was again perfectly supple and pillow-like.

The Chicken Smoked Rozali Kebabs revealed faint smoky undertones and a well balanced and flavourful, albeit a tad bit dry combination of kheema and cheese stuffed within.

The absolutely soft and moderately spiced Lamb Tikki were not just incorporated with some cheese to give it an interesting twist but also quite effortlessly melting in the mouth. The saffron based Warqi Parathas that they were served upon were equally good to taste owing to their faintly sweet notes.

A great aficionado of Blue cheeses that I am, my heart jumped with joy at the sight of Blue cheese kulchas in the menu. These Mini Blue Cheese Kulchas cooked in a tandoor were stuffed generously with a combination of blue cheese as well as some mozzarella. The cheese stuffing was aptly letting out a strong pungent aroma and a very vivid sharp, tangy and faintly salty flavour of blue cheese. It was also very thoughtful of them to balance out the piquant flavour of Blue cheese by adding just a little mozzarella so that it doesn’t get too overwhelming for the ones who don’t quite like Blue cheeses as much as I do – while also ensuring that the quantity of mozzarella isn’t way too much to effectively mask the presence of blue cheese altogether.

The Grilled Chicken Flat Bread topped with oodles of springy and supple mozzarella, succulent grilled chicken chunks, bell peppers and onions was again a delightful treat owing to its aptly crispy-crunchy consistency; more so as we progressed towards the edges.

The Chicken Nachni Pasta in Makhani Sauce was a very thoughtful attempt at making Pasta Gluten-free, with an interesting Desi twist to it, that too. While the sauce perfectly packed in a tangy-sweet Makhani flavour, the pasta made out of Nachni flour failed to mirror the al dente (to the tooth) texture of the Pasta normally used (provided that it is cooked well, I.e.). Their Nachni pasta was too soft and squishy instead. I suggest that they re-work on the appropriate cooking time for their Nachni pasta so as to ensure a perfect consistency hereafter.

The Thai Prawns Massaman Curry With Steamed Rice was undoubtedly a hit owing to the well retained juicy springiness of the Prawns (indicating that they were optimally cooked) and the mild yet rich and faintly coconut-y flavour of Thai Massaman curry. Absolutely no complaints regarding the rice papads served as an accompaniment either.

Mario’s Discovery was arguably one of the prettiest looking desserts I have had so far and oh-so scrumptious! Caps of the mushrooms were crafted using red macaroons that were bejeweled with blueberry compote jam pearls while white chocolate canopies formed their stems. These mushrooms stood tall on a soil that comprised of chocolate brownie bits, nutella, bournvita dust, pipings of thick and semi-sweet chocolate ganache and some whipped cream. 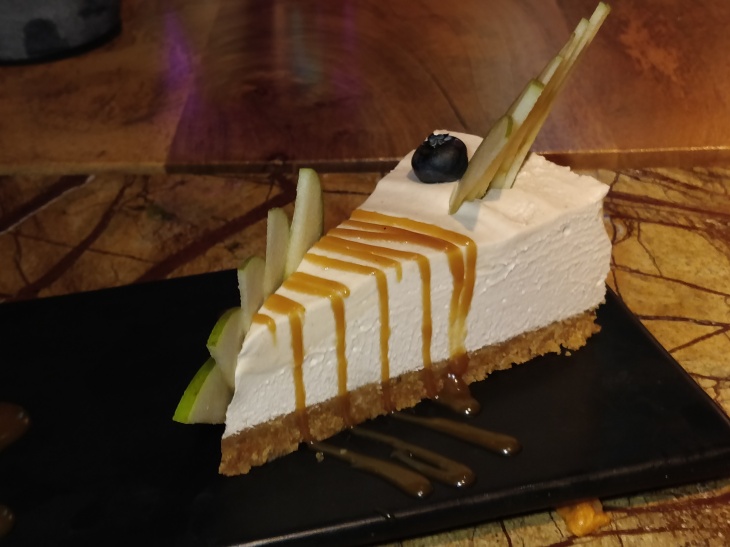 The Bailey’s Banoffee Pie was an interesting take on the classic Banoffee and comprised of dense and smooth cream resting over a buttery and crumbly biscuit base garnished with some sticky-sweet-salty caramel sauce drizzle and some green apple slices by the side. However, as a classic Banoffee aficionado, I really didn’t appreciate the fact that it let out hardly any flavour of bananas for a banoffee.

Tiramisu being yet another classic that I absolutely love, I had mixed feelings about their Deconstructed Tiramisu too. While the Mascarpone was adequately light, airy and creamy-smooth, the thin coffee flavoured disc that replaced the good old coffee-dipped savoiardi couldn’t quite mimic the robust richness of coffee that the latter quite effectively reveals in each bite. 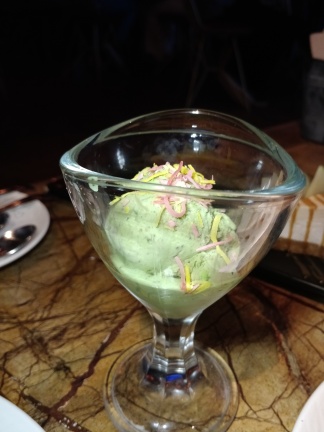 Home-made Paan Flavoured Ice Cream was adequately (not overly) sweet and creamy and also revealed an appealing minty freshness in each bite. 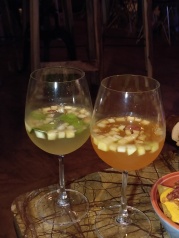 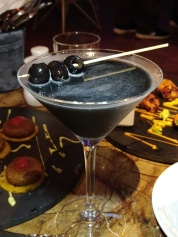 The manager Mr. Milind was a kind, cheerful and gracious host. The staff was welcoming, courteous and efficient. Our attendant for the evening not only answered all our food related queries patiently but was also keen on noting our feedback. The service was reasonably fast too, throughout the meal.
VERDICT:

VFM – NA (This meal was courtesy an invitation by the restaurant to sample their menu).